Are you a fan of superheroes?

One of the things that I love about superheroes is learning about their origin stories.

An origin story is when you find out about a character’s past and how they became who they are.

So let’s talk about Spider-man. 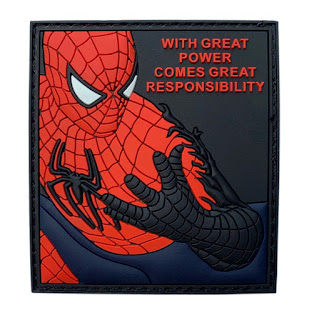 If you know about the origin story of Spiderman – you might remember that Spiderman is a person named Peter Parker.  And you have probably heard this quote – “With great power comes great responsibility.”   It’s known as the "Peter Parker Principal" to comic book fans. Here is some comic book trivia: The quote is often attributed to Pete’s Uncle Ben – but in the comic book Amazing Fantasy #15, where the phrase first appears – it is not spoken by any character. In fact, Ben has only two lines in the entire comic. The original version of the phrase appears in a narrative caption of the comic’s last panel.

That’s probably more than you wanted to know.

I’ve been thinking about origin stories and that famous quote because our scripture this week takes us back to the beginning of the story of Jesus and his disciples. The of the Gospel of Matthew tells us about Jesus calling them to be his followers and his instructions to them.  So, this is their origin story.

From the time after his baptism, Jesus gathered the people who would travel with him wherever he went. The first disciples he chose were fishing in the Sea of Galilee. Two sets of brothers, Simon Peter and Andrew, James, and John. They left their boats and nets to travel with Jesus.

And then Jesus met a tax collector named Matthew. Tax collectors were not liked at all by the Jewish people because they collected for the Romans. But Jesus, even though he knew that no one likes him, stopped and talked to Matthew and said, “Follow me.”

After he called them, Jesus gave instructions and taught the disciples. He said to them, “you have the power to heal every sickness. It will be soon time for you to go out in the villages without me and do what I do.”

Here are some other things Jesus told the disciples according to the Gospel of Matthew:
Go only to the people of Israel and announce “The kingdom of Heaven is near.” Heal the people who are sick and do not accept any money for what you do. Don’t take anything extra with you, like a bag of clothes. If you find someone good in a place, stay with that family. When you enter a house say “Peace.” If the people are mean to you, leave that house right away and don’t go back. Don’t worry about what to say because God will give you words.

That seems like a lot of things to remember.  I wonder what the disciples were thinking about all this.  Perhaps Jesus was reminding them that “with great power, comes great responsibility.”

What are your favorite origin stories?