Reflections for Youth - That's what HE said 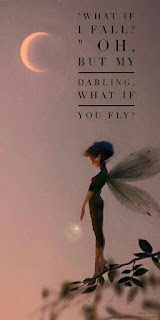 No doubt you have heard the parental question "If everyone jumped off a bridge - would you?"

I was thinking about this today as I read this week's scripture passage from the gospel of John.  Jesus is talking to the disciples and later in the passage, he tells them that everyone who believes in him will do the work that he did. AND will do greater works.


"Very truly, I tell you, the one who believes in me will also do the works that I do and, in fact, will do greater works than these, because I am going to the Father. " (verse 12)

Jesus has great expectations for us. He encourages us to do more - be greater! That is reassuring and comforting to me in today's current times when we have been trying to love God and love our neighbors from a safe, social distance.

So,  if Jesus jumps off a bridge, would you?
I think he wants us to. He wants up to not just jump off the bridge - but to leap.

Any maybe even fly.

But he doesn't want us to do it alone.

This is such a beautiful passage so I am posting the whole thing here. This is the NRVS translation.


Jesus the Way to the Father

14 “Do not let your hearts be troubled. Believe[a] in God, believe also in me. 2 In my Father’s house there are many dwelling places. If it were not so, would I have told you that I go to prepare a place for you?[b] 3 And if I go and prepare a place for you, I will come again and will take you to myself, so that where I am, there you may be also. 4 And you know the way to the place where I am going.”[c] 5 Thomas said to him, “Lord, we do not know where you are going. How can we know the way?” 6 Jesus said to him, “I am the way, and the truth, and the life. No one comes to the Father except through me. 7 If you know me, you will know[d] my Father also. From now on you do know him and have seen him.”8 Philip said to him, “Lord, show us the Father, and we will be satisfied.” 9 Jesus said to him, “Have I been with you all this time, Philip, and you still do not know me? Whoever has seen me has seen the Father. How can you say, ‘Show us the Father’? 10 Do you not believe that I am in the Father and the Father is in me? The words that I say to you I do not speak on my own; but the Father who dwells in me does his works. 11 Believe me that I am in the Father and the Father is in me; but if you do not, then believe me because of the works themselves. 12 Very truly, I tell you, the one who believes in me will also do the works that I do and, in fact, will do greater works than these, because I am going to the Father. 13 I will do whatever you ask in my name, so that the Father may be glorified in the Son. 14 If in my name you ask me[e] for anything, I will do it.

Jesus tells the disciples they are going to do even greater things than he has done. That's a pretty amazing thing for him to say. (Also, just a little bit of pressure? You think? :)

And then do more.

So, what if all of us play this game along with Jesus?  Jesus was just one person. Jesus is telling the disciples and us that there are more of us. So we can do great things and do them louder and greater.
Jesus might be saying:
Do what I've said  - and do what I've done - and when you do, do that TOGETHER - then you will do what I have done. And because there are more of you doing these things - it just might be greater than what I have done. (Whew. That was quite a sentence.)
So, what do we do? We love God and love our neighbor.
So, how do we do that? We do it together.
Reach out to a friend today and remind them we are all in this crazy world together.