Reflections for Youth - May 3

The stay-at-home order is making me do strange things. Anyone else?
Last week I got in my car and went for a drive to look for sheep. 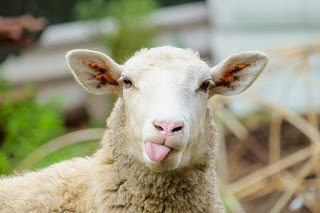 I've been filming videos for the Time for Children part of our online church service each week. I wanted to get some video of some real-live sheep in a field.  I live in a farming community and I was sure that someone in my community had sheep.  So, off for a drive, I went.

But no sheep.  I do have friends that have a sheep farm - but they live pretty far away. So, disappointed I gave up and went home.  That's one of the ways we pass the time in the countryside.  We drive around looking for sheep.

Sheep are probably the most talked-about animal in the Bible. This means there is also a lot of talk about shepherds, too.


The very famous 23rd Psalm says,  "The Lord is my Shepherd, I shall not want."

In John 21: 15-19, Jesus tells Peter repeatedly to 'feed my sheep" and "tend my sheep."  In Luke and Matthew, Jesus teaches with the parable of the lost sheep.

These are just a few of the many, many mentions of sheep and shepherds in the Bible. So, it makes sense that Jesus would use the occupation of a shepherd to help describe himself and to teach.  Remember that Jesus used common, everyday things that people would be familiar with to teach about God.  I am sure Jesus knew many shepherds. During his time of teaching and preaching and wandering about  - shepherds were all over the hillsides.  People in those days all knew about shepherds so Jesus talked about himself and taught in a way that would be familiar to them. Everyone at that time probably knew that leading sheep was a hard, dirty, dangerous, and not at all glamorous business.

Here is a little Shepherding 101 from those days:

The Gospel of John contains the familiar passages of Jesus describing himself as the good shepherd (John 10: 11-18).  But just before that, Jesus talks about how it's the shepherds that protect the sheep and keeps them safe.

This week I have been thinking a lot about the part of this passage where Jesus says,  "They will not follow a stranger, but they will run from him because they do not know the voice of strangers.””

So when Jesus calls us to follow his voice - he wants it to be because we know him. We recognize him. We follow him because we know that he is the one that will care for us and teach about God's love for us. When, like the sheep who get mixed up with another flock, we will follow his voice as our leader.  Jesus wants his voice to be louder than other voices that can distract us.

This passage reminds me that Jesus promises his voice and his teachings will bring us back to God and God will never let us go.

Questions to think about: